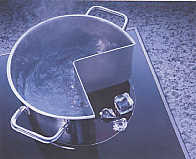 It all started with an apartment kitchen.
The client in question not only wanted a kitchen that was designed for a serious cook, she wanted appliances similarly appointed … which meant she wanted a gas cook surface. Unfortunately, there was no gas in the building and no amount of pestering (let alone money) was going to get the strata council to bring it into the building any time soon.

So what exactly is induction cooking and why was it the best solution for this client? In basic terms, an induction cooktop uses a high frequency electro-magnetic field to make the cooking vessel become the source of heat, rather than the cooktop itself. So, if you were to turn on an element on an induction cooktop and place your hand on it, you would feel no heat. But put a cast iron frying pan on top, and the pan gets hot in a hurry. And because the heat comes from a direct response to the magnetic field, the heat adjustment is instant … every bit as instant as from gas. 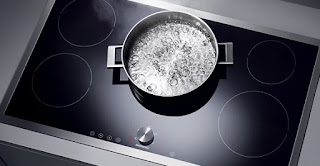 For those of you who are interested in keeping things “green,” consider this: because the cooking vessel is now generating the heat, there is much less energy wasted. In the case of a gas cooktop you only have to see the flames licking around the side of a pot to know there’s a lot of heat going up the vent. The side benefit of this is less heat goes into your kitchen which can keep things much cooler. There’s a joke in here about not being able to stand the heat …

This is not to say that induction cooking is without its drawbacks. The most notable one involves your cookware. You know your aluminum, copper and Pyrex pots and pans? Not useable on an induction cooker. The magnetic field requires ferrous iron to work so if you don’t already own some, you may need to make an investment in new cookware.
For a complete run-down on induction cooking, check out The Induction Site.
Posted by Arne Salvesen at 10:12 AM