Seeing is Believing Part 2 - or - Where's the Paperwork? 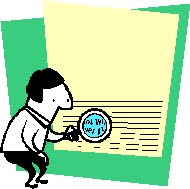 Part 1 of this post was made over a year ago, which means one of two things. A) Outlining project details with your client is no longer a problem, or B) it was not a problem until NOW. The clever among you will know that the answer is B), because of course A) is never likely to occur.

There have been two incidents brought to my attention that nicely illustrate the importance of going over the details of your project BEFORE things get ordered. The first involved a glass backsplash that the client believed was going to be seamless, or rather, one single piece. The designer had run into this request on a number of occaisions, but had always been told by his supplier that while it was possible to do the splash in one piece, he fealt it was better to do it in sections.
When the splash was installed, the customer called the designer, horrified that the splash was not being installed as one piece. The designer believed he had told the client that the splash would indeed have seems, and the customer had always thought the splash would be one piece.
A similar situation arose with another job, this time over countertops. Only one colour of countertop had ever been discussed during the design phase of the project, except at a final meeting when the client mentioned she had been looking at another colour. After some discussion, countracts were signed and materials were ordered. The trouble was that both the designer and the client left the meeting with a different understanding of what colour of countertop was going to be used.
Each of these situations was of course completely avoidable. How? Paperwork. A simple change-order or addendum to the contract going over the specifics of the materials to be used would ensure each side was being undertood. Of course it is impossible to cover each and every detail in a project. However, as a designer I do my best to ask all the questions, even the "stupid" ones. As a client, if you aren't clear about something, be sure to ask for clarification before you sign anything. If you can't get clarification, don't sign anything until you do.
To quote Red Green, "Remember, we're all in this together."
Posted by Arne Salvesen at 1:40 PM