My Last Friendly Trip to Seattle 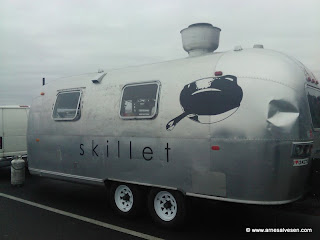 It was a happy accident that led us to Skillet.  We were at a coffee shop on Alki Beach in West Seattle, taking a break from walking the dogs when this beautiful silver bullet drives by.  I'd actually heard of Skillet before, having read about it in an article about the street food scene in Seattle and Portland.  I gave chase, but the trailer turned the corner and was gone.  Disappointed we headed back to the car only to see Skillet parked not 10 metres from my drivers' side door!

There was no way we could pass up a chance to try some Seattle street food.  But since we'd already made plans for lunch that day (more on that later), a slice of lasagne or a burger with poutine was out of the question (no offence Skillet, but poutine is NOT made with cheddar).  It's a shame because it all looked really good.  They even sell something called Bacon Jam, which regrettably they were out of that day.  Probably for the best as I have no idea how the border guards would react when I included "bacon jam" in my customs declaration

We ordered a bowl of Roasted Duck & Coconut Curry Soup.  For $5 the bowl seemed a bit small at first.  But then we opened the lid and realized that about 40% of the soup was huge chunks of very tender roasted duck!  The soup was amazing.  Flavourful, satisfying and a perfect way to warm up on what was a typically cool November day in the Pacific Northwest. 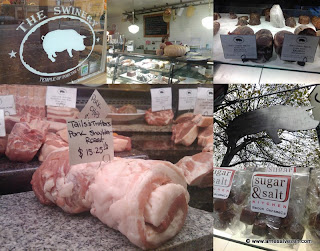 Our planned destination for the day was also in West Seattle.  I've mentioned The Swinery before, but the last time we visited The Swinery it was at their temporary kitchen near Pioneer Square.  They've since closed down that location and have moved into some newly renovated digs on California Avenue.

These folk run a butcher shop the way it was meant to be.  Meats are sourced as locally as possible and most everything is cured in house.  Don't see what you want?  Just ask and they can likely source it.  Other products, like the bacon candy from last post, are also available.  (Note:  Just tried some on the Bacon Brittle and it's AWESOME!)

I can't say too much about the butcher shop outside of what I read and saw.  Such is the plight of a tourist without a fridge or a kitchen ... I just wasn't able to do the place justice.  But fortunately that didn't mean we couldn't enjoy some of their product, for just around the corner and behind the butcher shop is their lunch counter.  (That's head butcher & owner Joey Brewer in the kitchen working on a bottom round roast.)

Just like their old kitchen in Pioneer Square, vegetarians should stay away.  There's a breakfast menu (served Saturday and Sunday from 10-2) that features Biscuits & Gravy and a Daily Hash.  The lunch menu (served Tuesday to Friday from 11-3, and a smaller lunch menu for the weekend) has a burger, pulled pork sandwich, Scotch Eggs ... and FRIES!  I use the upper case letters because these are old school fries, cooked lovingly in healthy (seriously!) tallow.  If that's too healthy for you, there's the Danger Fries that take Tallow Fries and add a bacon-cheese bechamel sauce.

J had a breakfast sandwich:  house-made sausage with egg and cheddar on a fresh bun.  The sausage was so tasty in this.  Like any sausage made with fresh meat, the flavour of the meat really stands out.  The pork flavour from this sausage was off the chart.  If I could change one thing I would use a biscuit instead of the bun.  Minor I know, but when I see Biscuits & Gravy on the menu, I get a little loopy.

I went with the Bacon Dog.  I know what you're thinking.  You're thinking "where's the bacon?"  Think inside the bun, or rather, inside the wiener.  The wieners are 40% Swinery bacon, and very juicy as a result. They're a European-style wiener so they have that snap to the skin when you bit into them.  And if the BEST WIENER EVER isn't enough, The Swinery provides their own pickles for condiments.  Sauerkraut, pickled onions and some amazing dills complete a really good hot dog.  Add in some Tallow Fries (no Danger Fries... we're not piggy!)  I felt there was too much bun for his hot dog, easily solvable by using a thinner baguette.

And so ended our last friendly trip to Seattle.  Next year the Whitecaps join the MLS, and Seattle, saddly, will become enemy territory.  Good thing we know where to eat ... just in case we get caught behind enemy lines.